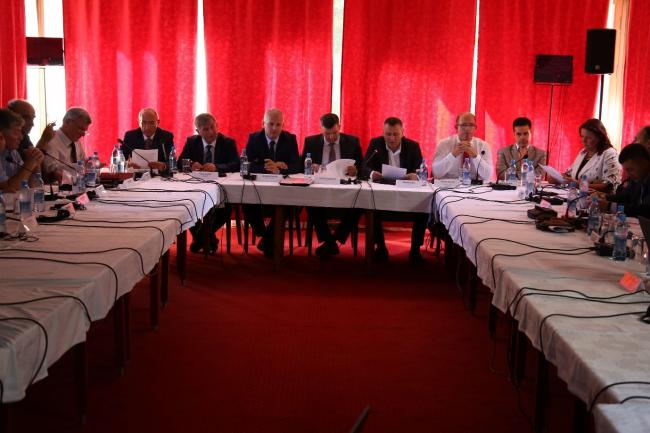 Prishtina, August 30, 2016 – Blerim Isufaj, Chairman of the Kosovo Prosecutorial Council (KPC), attended a meeting organized by the ICT/CMIS Project today, where he presented a proposal about the unique case number in the Prosecution.

Chief Prosecutors and Administrators of the Kosovo Prosecutions participated in this conference as well. Chairman Isufaj stated that the Kosovo Prosecutorial Council, in accordance with the Strategic Plan on Information and Communication Technology for the period 2015-2020, has planned for the digitalization of prosecutions, transforming the manual system into a digital one.

“It is impossible to think of collecting accurate information promptly, from which credible statistical data on assessing Prosecutors' success and the number of cases if one does not have an advanced Information Technology infrastructure,” said Isufaj.

Chairman Isufaj concluded his speech by stating that the KPC intends to implement an electronic case management system for all Prosecutions in 2017-2018, and that this system would include the opportunity for any case submitted to Prosecutions to be conducted electronically.

During this meeting, Director of the KPC Secretariat also presented the current registration and identification cases system being used by the Kosovo Prosecution.

22.06.2022
Completion of the Project “Case Management Information System for the Judiciary in Kosovo”
Last night IMG organised a reception in Prishtina on the occasion of completion of the Project “Case Management Information System for the Judiciary in Kosovo”.At the reception were present the...
18.11.2020
The CMIS implementation began on the Supreme Court of Kosovo
The Supreme Court of Kosovo will train 48 users, with the trainings scheduled to be completed by the end of December 2020. Initially, clerks would be trained in the use of CMIS, but due to the...
22.06.2020
The CMIS Project began with the piloting of manual registries removal in the Basic Court of Ferizaj
Through the implementation of this activity, now all the documents received in court will be registered in the electronic registers through the CMIS system, thus increasing the efficiency in the...
15.02.2019
Work continues on the full implementation of the ICT/CMIS Project
The user training report and the implementation of the CMIS in the criminal sector in the prosecutor's offices and courts were discussed at this meeting. The CMIS pilot study on the Civil sector in...
20.10.2017
Inaguration of the new Data Centre of the Judicial and Prosecutorial System
The heads of the Judicial and Prosecutorial systems, as well as representatives from other local and foreign agencies, attended the inauguration ceremony. The ICT/CMIS (Information and Communication...
30.08.2016
Discussions on the proposal for the unique case numbers in the Prosecution
Chief Prosecutors and Administrators of the Kosovo Prosecutions participated in this conference as well. Chairman Isufaj stated that the Kosovo Prosecutorial Council, in accordance with the Strategic...